Muttie wrote:So simply multiplying with RoF may not be that accurate really. Nor seems reducing the RoF based on the hit chance. (?)
Still no idea how to figure out the total damage of a burst, to be honest.

There's a post by Atom on NMA explained how burst attack works in the engine: http://www.nma-fallout.com/threads/crit ... st-3645850
Dividing RoF by 3 and rounding down should be a more reasonable mean value for a burst attack, unless the attack is done in point-blank range. You need to use some hook script if you want to get the exact number of bullets that hit the target.
Top

Thanks, for finding that old post. And thanks for the rule of thumb.

Atom wrote: All the bullets are divided into three groups (left, right, central, that will contain about 1/3, 1/3, and 1/6+n bullets respectively, where n are leftover bullets from the initial 1/6 volley that attacked the primary target).
These three groups will then travel along three "parallel" tracks (but hex adjacent to the attacker is common for all of them), trying to hit targets on the way. And skill does matter - determine_to_hit is called every time the valid target is found. Basically, when the group of bullets finds the target, the bullets try to hit it one by one until one of them fails. Then they move on to the next target.

And to sum it up:

Burst calculation:
1/6 bullets of the Round of Fire will hit the primary target and make hit rolls.
The rest of the bullets (RoF) are split into three groups: 1/3 of the bullets go to the right, 1/3 to the left and the remaining 1/6 stay central (probably going towards the primary target). Those three groups will check for hits until a bullet misses. When that happens the remaining bullets of that group will not make hit rolls, but travel past the target and try to hit targets behind it (same procedure).
So if I burst an opponent from point blank range 1/6 of the RoF will make a hit roll, while 5/6 of the bullets will also do so until one bullet misses, then the remaining bullets of that group (Note: those 5/6 bullets “may” still be split in three groups of 1/3, 1/6 and 1/3?) will travel past the point blank target to hit targets behind it (if any).

Is this correct? I think it is. The only thing I'm not clear about are the “leftovers”

Atom wrote:and 1/6+n bullets respectively, where n are leftover bullets from the initial 1/6 volley that attacked the primary target

Are those leftovers all bullets after the first, or any that missed, or fractions?

However, if this is correct and confirmed it actually could be added to: http://fallout.wikia.com/wiki/Burst_Shot
Top

I tried several combinations and it either fails „to find exe, master.dat, critter.dat“, „Can't unpack file proto/item... from master dat“ or I get a scrambled list of RP Mod and Resurrection items, with the Resurrection items only being there in name and description, but all the other details are off (Browning Rifle is a container etc.).

My base FO2 game is a GER CD, which may complicate matters. However, I can display FO1, Fixt and RP Mod just fine.
Top

Here's my F2wedit setup for Resurrection: 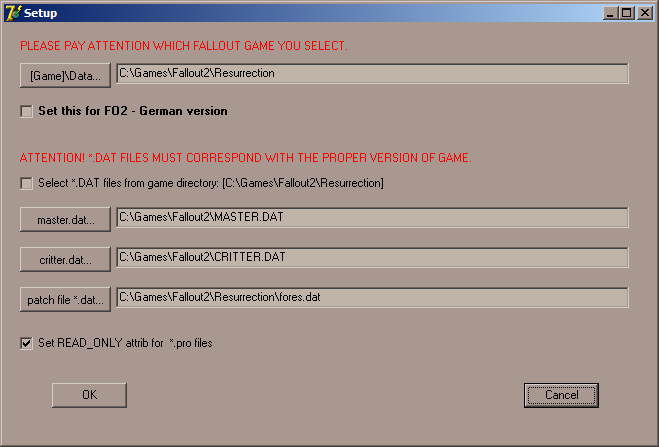 Thanks, it didn't work at first, but after some messing around I figured out that I needed Fallout2.exe in the Resurrection folder (copy and paste). Otherwise the message “can't read .exe or .dat” popped up. Otherwise, the settings are on point. Thanks.


Muttie wrote:The only exception really was the Browning Rifle using Living Anatomy. And also only in so far as Living Anatomy apparently didn't apply (?).

P.S. I think I figured this out. I used Keri and Lystra as practice targets, and they may have been such a high level that they had additional DR (something Daemon mentioned recently when asked about companion level ups). So the standard calculation I did wouldn't add up. The confusing bit was that all other calculations did. However, checking again I realized that “all other calculations” were Laser, Plasma and Explosion damage (aha!). So Living Anatomy adds the 5 points of damage just fine, if including the “invisible DR” of the companions. At least, I think that's what it was.
Top
Post Reply
35 posts